The successful offensive in the Karm al-Yasar.

Government forces continue their offensive in the eastern neighborhoods of Aleppo. Militants have not yet had time to recover from the loss of the northern areas, and the Syrian army again dealt an unexpected blow.

This time, the attack went compound of the Republican Guard and Special Forces under the command of Tiger Suhel Hassan. According to the command of a sudden blow in the area of ​​Karm Al Yasar should cut the enemy group into two parts, and the ultimate goal - the removal of the blockade on the citadel and the liberation of the whole of the old Aleppo.

The commander of the assault divisions: in the morning at 9 o'clock we went on the attack and captured a section of road in the area of ​​Bab Al Neirab. But the attack is still not over, God forbid, in the evening we will be able to take the entire area, as well as to carry out its cleanup. Today, the enemy lost many of his men, and those that remained, and went far away. But this area is still not safe, for we are constantly working sniper.

The configuration of the front at the site has not changed for more than three years. Militants had well-equip their position, but even so they were forced to retreat.

Soldiers moving dashes, and although it may seem that the area is safe, over the head constantly bullets fly. Particularly dangerous area has to run under the cover of tank armor.

The commander of the assault units: For these bags still morning were terrorists. But as you can see now it's in our hands. Yes, be careful, the militants could leave the mine.

Our soldiers went ahead. Right of Hasan soldiers Suhel work from us. And in an area that is left is still a lot of fighters.

On the way back, we can not find a driver's license, which likely belonged to militants.
In order to keep the pace of the offensive command sent another assault group on this sector of the front.

The soldier on the front line: Thanks to all those who helped us in this attack, God forbid, soon we will liberate all parts of Aleppo.

Syrian troops continue to attack successfully, and that the distance seemed fighters who are a captive thriller. According to them, it is more than an hour kept defenses in the building, but still prefer life and surrendered. At first glance, such people can cause sympathy, but when it comes to why they fired gas bottle for peaceful neighborhoods, they cry and do not know what to say.

It is said that the prisoners the militants have become often fall into the hands of the Syrian army, that the man was detained at a checkpoint with a gun in his hands, but he tried to pass himself off as civil unlike previous militants, he said he did not know anything, and the weapon fell to the his hands accidentally. But after numerous wounded, gunman lost control and began to tell the truth were found on his body. 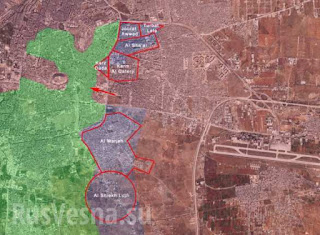